We love nothing more than to hear from our clients about their trips to India —and Sanjit Chudha certainly has some incredible experiences to relate from his recent adventure. Traveling on a bespoke Greaves itinerary, he ventured to Delhi, Agra, Rajasthan, Amritsar, and beyond, and saw temples, palaces, and other stunning landmarks along the way.

Now, he’s kindly sharing a selection of his own photos and favorite reminiscences from the vacation, from spa massages and melt-in-the-mouth kebabs to night-time tours of the Golden Temple and early morning visits to the Taj Mahal.

Read on for more of Sanjit Chudha’s impression of the magic of India — and perhaps discover some inspiration for your next getaway along the way. 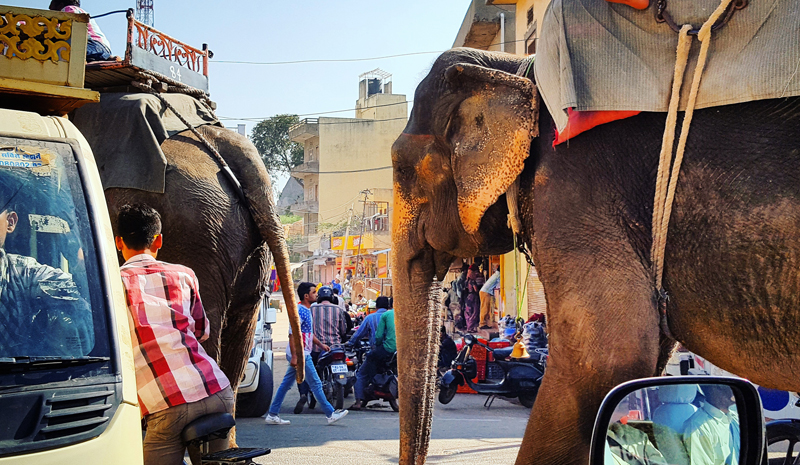 Greaves: Tell us about your trip to India. How did you approach your itinerary, and what were you hoping to see?

Sanjit Chudha: ‘The itinerary was driven by a desire to see and experience places with some connection to my family. We were keen to discover the magic of India, but wanted to have all the comforts of home close at hand. The trip delivered on both counts.’

You visited several historical sites during your stay in India. What was it like seeing the Golden Temple — and other marvels — up close?

‘The Golden Temple was magical and inspirational. Visually it’s ravishing, and at night it’s dreamlike. But what was truly special was the care and attention of our knowledgeable guide, who gently took us on a tour not only of the building, but also through the philosophy which inspired its construction.

I had no idea that the temple complex was so large. And that’s true of all the places we visited. The scale was, well, off the scale!’ 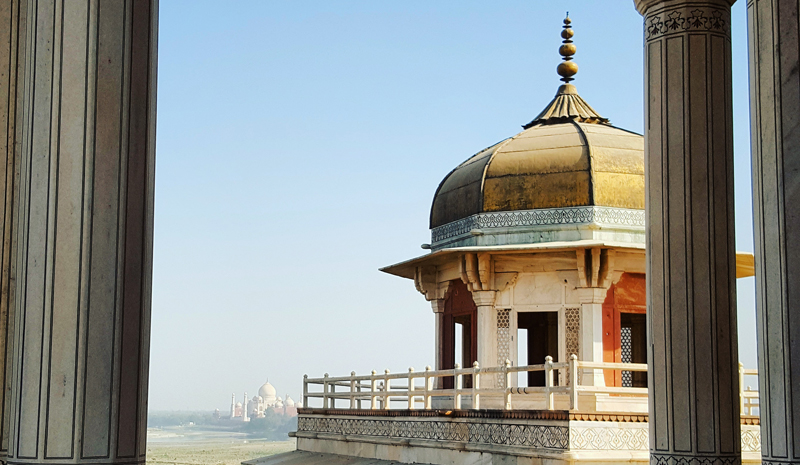 The Taj Mahal in the distance © Sanjit Chudha

Did you have a favorite destination during your trip?

‘It would be impossible to pick just one destination or site. They were all so amazing in their own ways. Seeing the Taj Mahal up close was, as you might expect, breath-taking. But so too was seeing the lesser-known precursor to the Taj, the Itimād-ud-Daulah.

Aside from the amazing buildings, experiencing the context was one of the most impressive things about the whole trip. Fatehpur Sikri — Emperor Akbar’s abandoned and monumental city — was another stunning destination. So too were the magical forts and palaces of Rajasthan.

If I were really pushed, I’d say the highlight for us was the retreat we took at Shahpura Bagh. We were hosted there by Raja and Rani, and taken on trips to their magical Dhikola Fort as the sun set. We were also fed the most amazing food, from melt-in-the-mouth kebabs with gin and tonics (which we enjoyed poolside) to delicious dinners made from produce grown in the surrounding fields.’ 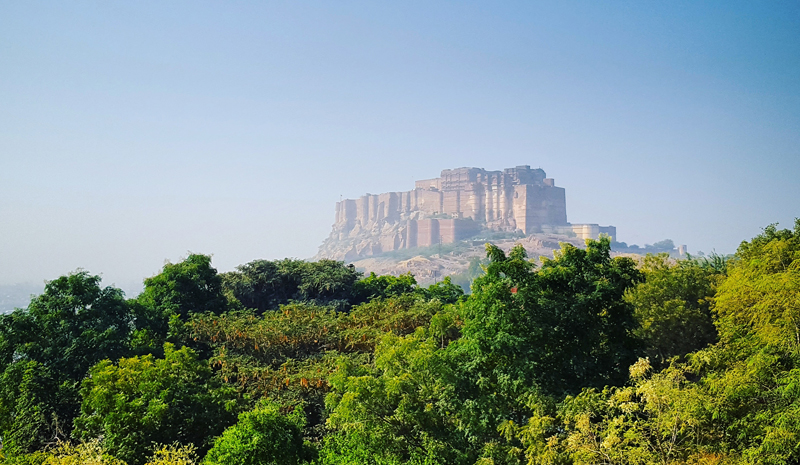 In addition to Agra, Delhi, and Amritsar, you also visited Rajasthan — the land of kings. Did your stay there impress you?

‘Of course! The scale was truly astonishing. But so too was the quality of everything we saw.

Udaipur felt like a kind of Indian Monte Carlo, albeit on a much grander scale. The palace complex was beautiful, as were the magical lake trip and the walk through the old city bazaars, during which we visited temples and saw the sights.

Jaipur has its own magic too, and seeing an example of a planned city from such an early date was truly impressive.

Jodhpur was an also an amazing experience. We visited the Mehrangarh Fort and toured the city bazaar. Seeing the dome of the Umaid Bhawan Palace in the distance made us realize just how large a city it is.

What was especially wonderful about our trip was the knowledge that we were in safe hands. The chance to travel in comfort and safety with our driver made the whole experience better. And seeing the countryside and villages as we passed was another bonus.’ 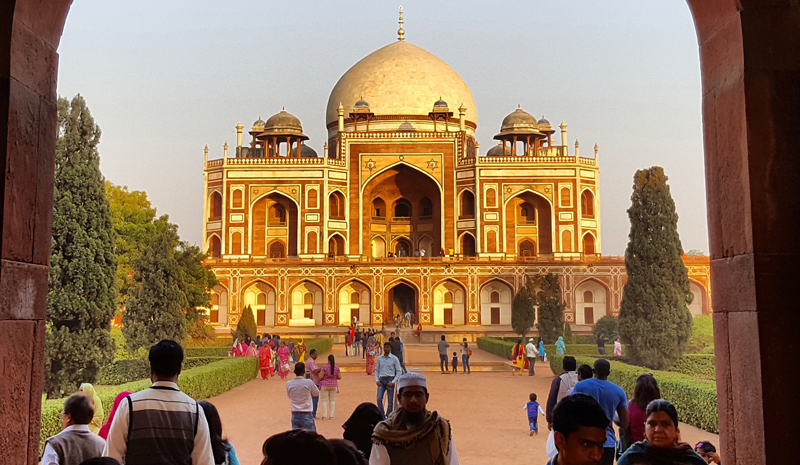 Tell us about the amenities you enjoyed at your hotels. What were some of the hospitality highlights of the trip?

‘All the hotels we stayed in were very comfortable, and with the kind of quiet, solid luxury we prefer. The food at each was not only plentiful but of an incredibly high quality too, with a great range of drinks to accompany it.

I had the most amazing, relaxing head massage at 47 Jobner Bagh. The hotel also had a great shop selling textiles, rugs and crafts. Raas Devigarh in Udaipur and Raas Jodhpur both had amazing spas, but we were so busy sightseeing we didn’t get to enjoy those, unfortunately.’

Did you eat any particularly delicious meals?

‘The food throughout our trip was flawless, but the dining experiences at 47 Jobner Bagh and Shahpura Bagh really stood out. At the former, the chef was on-hand to guide us through each dish, and at the latter, the freshness of the ingredients was exemplary (especially given that we visited the farm where they were grown).’ 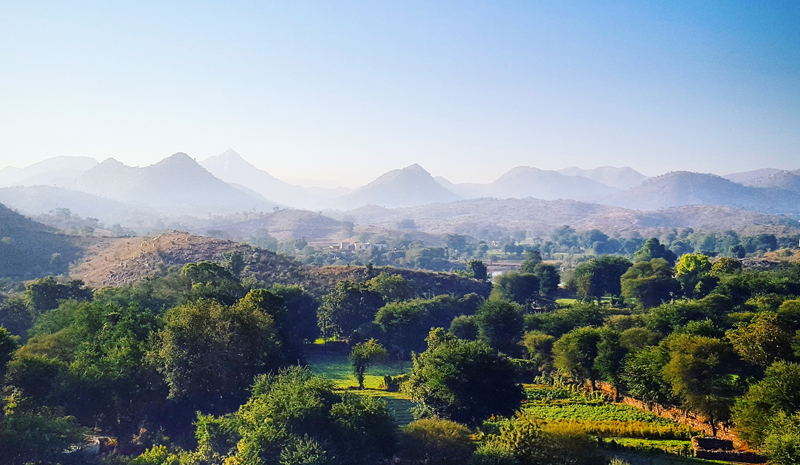 The magic of India © Sanjit Chudha

What was your most memorable experience of the trip?

‘There were so many. In no particular order: we were amused by the goat who followed us through the Mehrangarh Fort, and adored the elephant ride at the Amber Fort in Jaipur. That first sight of the Taj Mahal in the early morning was far more beautiful than anything else we’ve ever seen. The Golden Temple at night, soundtracked by the low hum of a hymn, was magical.

We also loved seeing the Udaipur Palace complex from the lake, admiring Fatehpur Sikri’s monumental folly, and discovering the Jain temples at Dilwara. In Delhi, we saw the sun set at Humayun’s Tomb, and visited the Qutb Minar and the Lodi Gardens.

Then there was our trip to the Dikhola Fort at sunset, dining at the Mountbatten Lodge at Ranakpur as cheeky monkeys looked on, enjoying the views of the Aravalli Hills from the Raas Devigarh, drinking in the vivid street life everywhere we visited…and perhaps best of all, catching a glimpse of golden-lit Delhi from the air as we broke through the cloud layer moments before landing at dawn.’

Would you return to India? Where would you like to go next?

‘We would return in a heartbeat! Next time I suspect we may venture slightly farther East and North, and definitely a trip South.’

Do you have any tips for fellow first-time travelers to India?

‘Don’t imagine you can ‘do’ India in a few days. Start with one city and gradually ease into a more rural and relaxed pace to get the best out of it and give yourself time to discover it properly. The food and the people really are lovely, and there’s a vivid sense of energy, which is incredibly inspiring. Just be open, and India will reward you.’

Travel Tips for India: See the Golden Triangle (and Skip the Crowds)

When it comes to India’s most popular destinations, the Golden Triangle is virtually without rival. Consisting of New Delhi, Agra, and Jaipur at its three…

For many, visiting the Taj Mahal is at the very top of a bucket list of life experiences. And we can attest that seeing this…