When a 20-year-old Simran Kaur discovered a derelict Indo-Portuguese villa, overgrown and abandoned by a lake in Goa, she had little idea that she would be the one, years later, to restore it to its former glory. The result is Amrapali – House of Grace, a tranquil idyll tucked on a quiet edge of Goa Velha. Beautifully renovated and decorated with exquisite attention to detail, this luxury boutique hotel is very obviously a labor of love. Here, its founding visionary Simran shares how she went about transforming it from ruins to one of Goa’s loveliest hotels, what to order at Café Amrapali and how to while away a visit.

The house has a steep history—how did you come to acquire it? 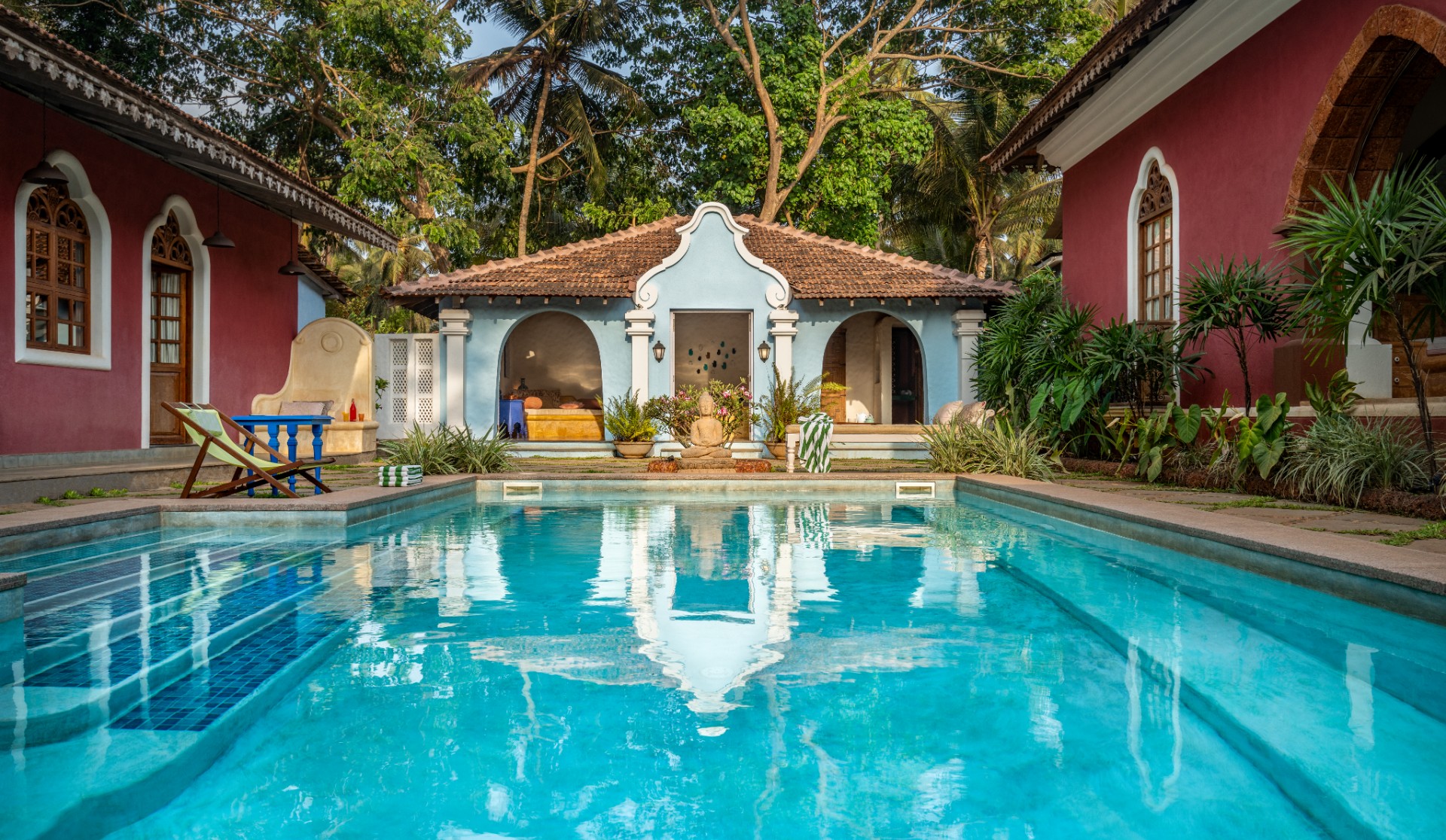 “I was only 20 and with my friends in Goa when my father sent me to take a look at this house, which he was considering acquiring. Even though the grounds were overgrown, I could see its beauty. I went home and simply told my father that the house wanted to be alive. I have no idea when he bought it but it was only after his death 10 years later that my mother said he had purchased it and that he had wished for me to have it.”

What inspired the décor? 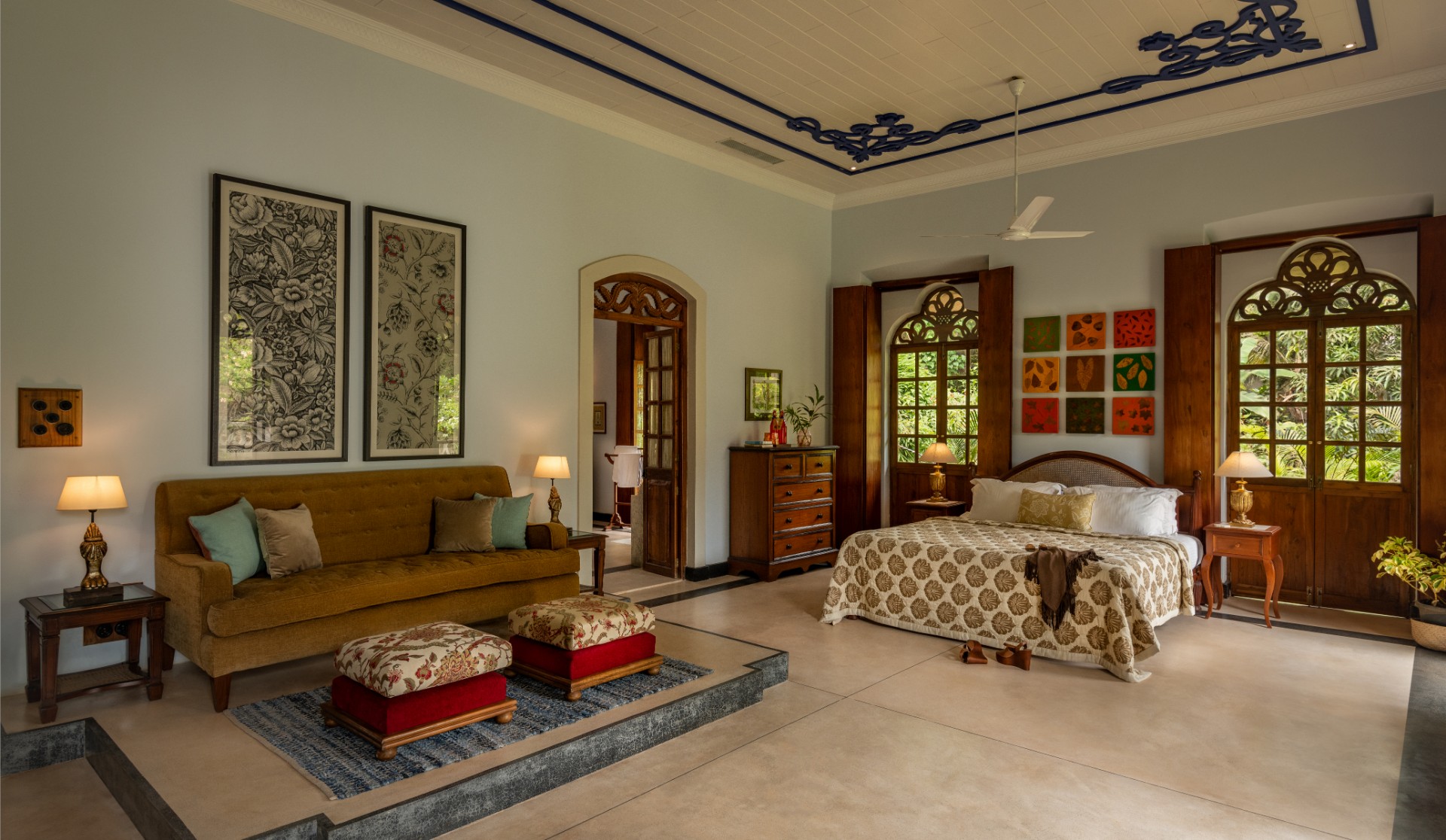 “Both the architect, Alex Von Moltke, and I were clear that we would not compromise the integrity of the house. All old pieces we salvaged were recreated to reflect the old—for example the doorways are the same as the originals since we had local woodworkers remake the carvings. Architecturally, we stayed true to Indo-Portuguese design, drawing our inspiration from the old houses of Goa and books written on the same. I love the beauty in functionality of Portuguese architecture so our pillars and doorways and archways are themselves works of art. The house itself is beautiful, the interiors merely adornment.”

Can you tell us about the name, Amrapali – House of Grace? 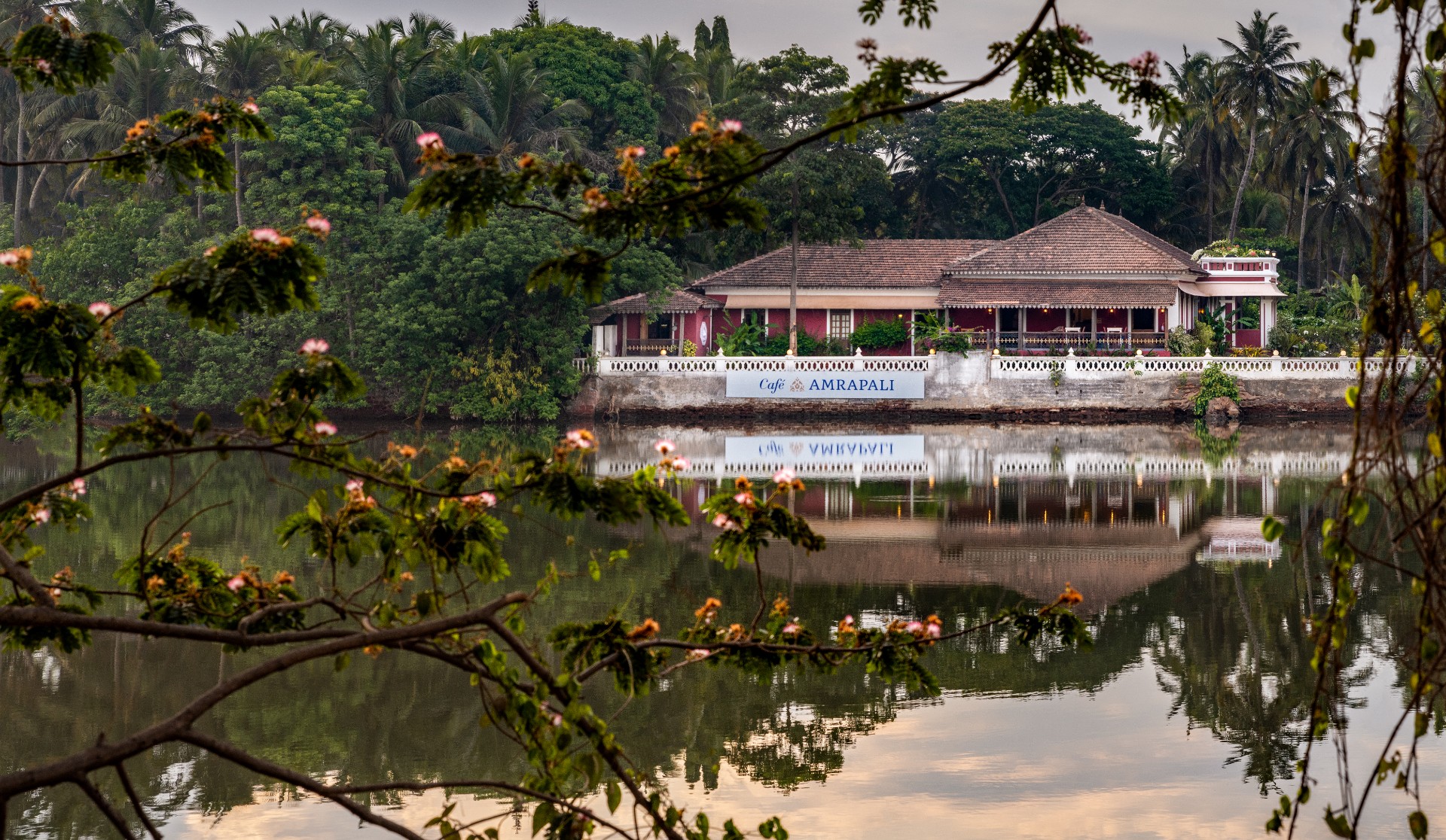 “The name Amrapali has many references for us, one being the literal meaning—young branch of a mango tree—which is our grand, 100-year-old mango tree planted the same year as the house was built; it yields mangoes in the thousands every year. The other reference is that of the legend of the beautiful courtesan Amrapali. It is said she was spontaneously born at the foot of a mango tree in the gardens of Vaishali. She kept a home in a mango grove, grander than that of many kings, however when she met the Buddha she donated her entire wealth to Buddhism and became a devotee. 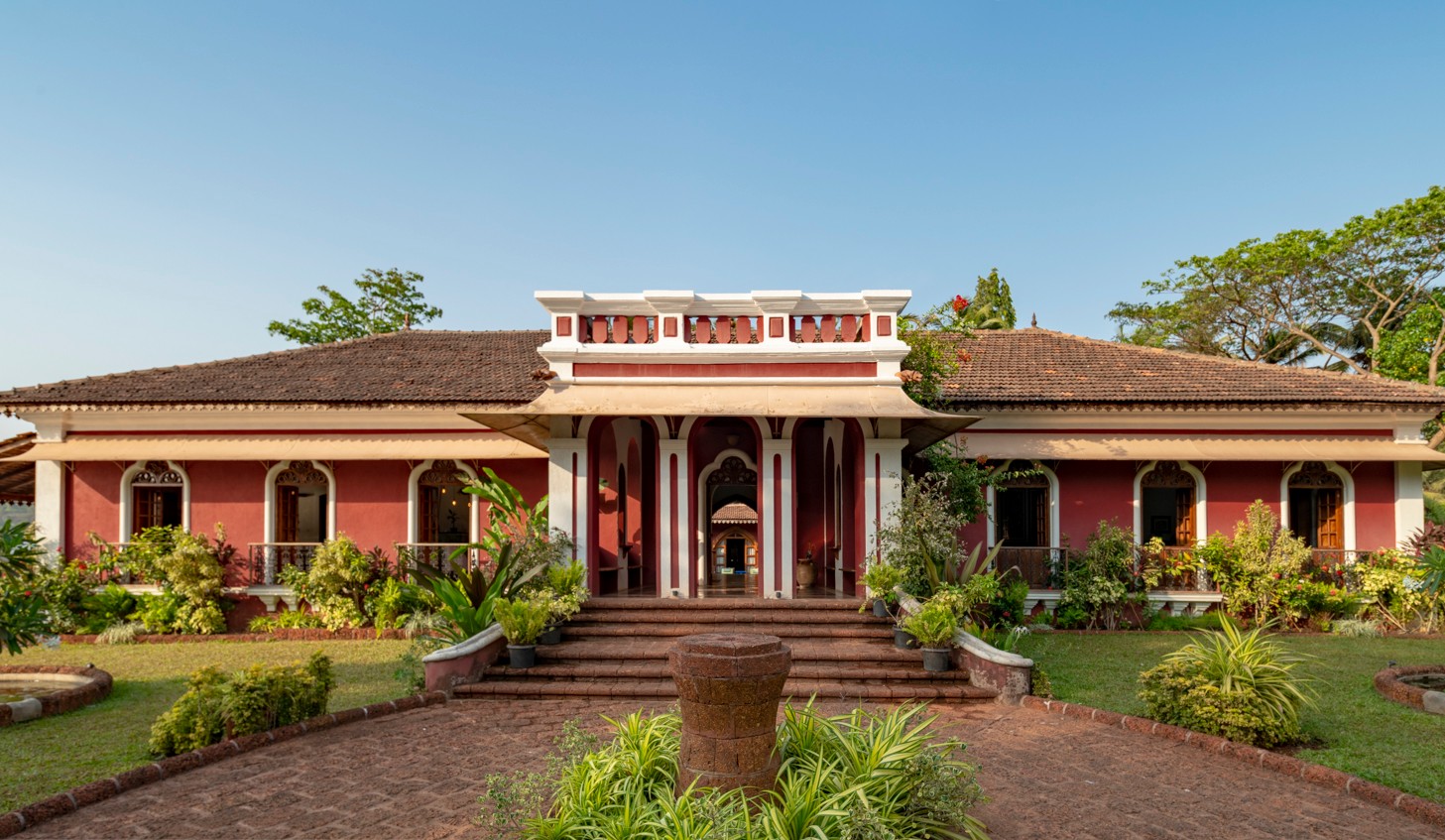 The House of Grace has a deeply personal reference. When this beautiful home, unoccupied for 50 years, was going to fall, I simply intended to restore it with no knowledge of where the funds would come from and no fixed plan of what the space would come to mean. The funds arrived, the architect showed up without interview, as did a contractor who cared and still does. Even our management, Mathieu Chanard, came to the doors of his own accord. Local artisans pushed the boundaries of their own creativity, encouraged by the architect and myself. When they left the project they jointly gifted me a plaque in thanks for the opportunities to create beauty that they had been given. I understood that when intentions are pure, grace pulls out the shots and does everything herself. Since we’ve been abundantly blessed with unearned grace, we wish to wrap you in it and inspire your own natural state of grace!”

Which is your favorite place in the hotel? 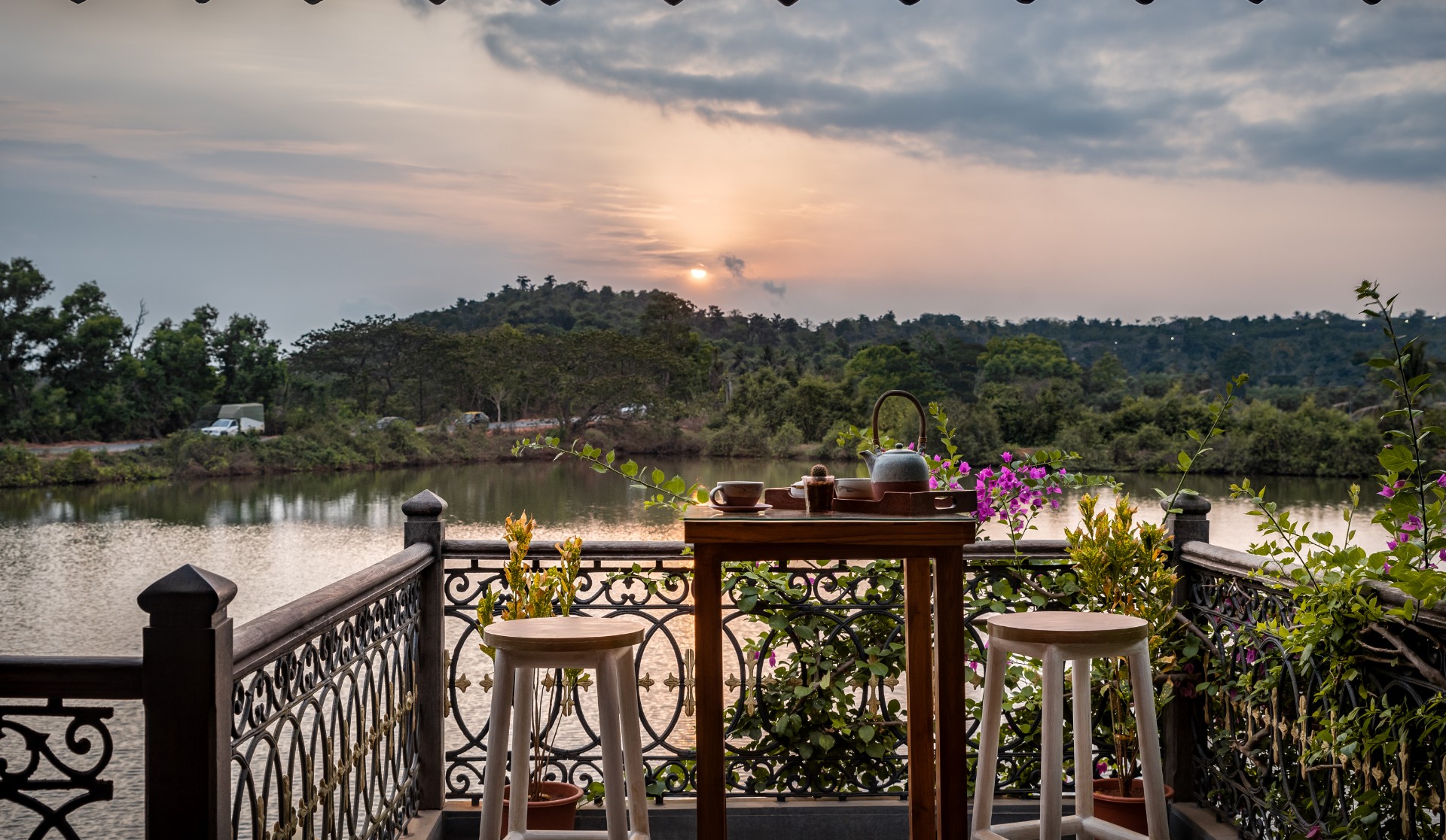 “There are no favorites. Some days I like to sit by the waterfront on the verandah and watch the world reflected on the water, other days I enjoy relaxing near the lion fountain listening to the daily orchestra of the birds from under the shade of huge elephant palms. I love to watch guests doing the same, choosing spots to enjoy a coffee or read a book—we see them often spending an entire day moving around the property experiencing different spaces.”

There are so many beautiful objets d’art… which do you most love? 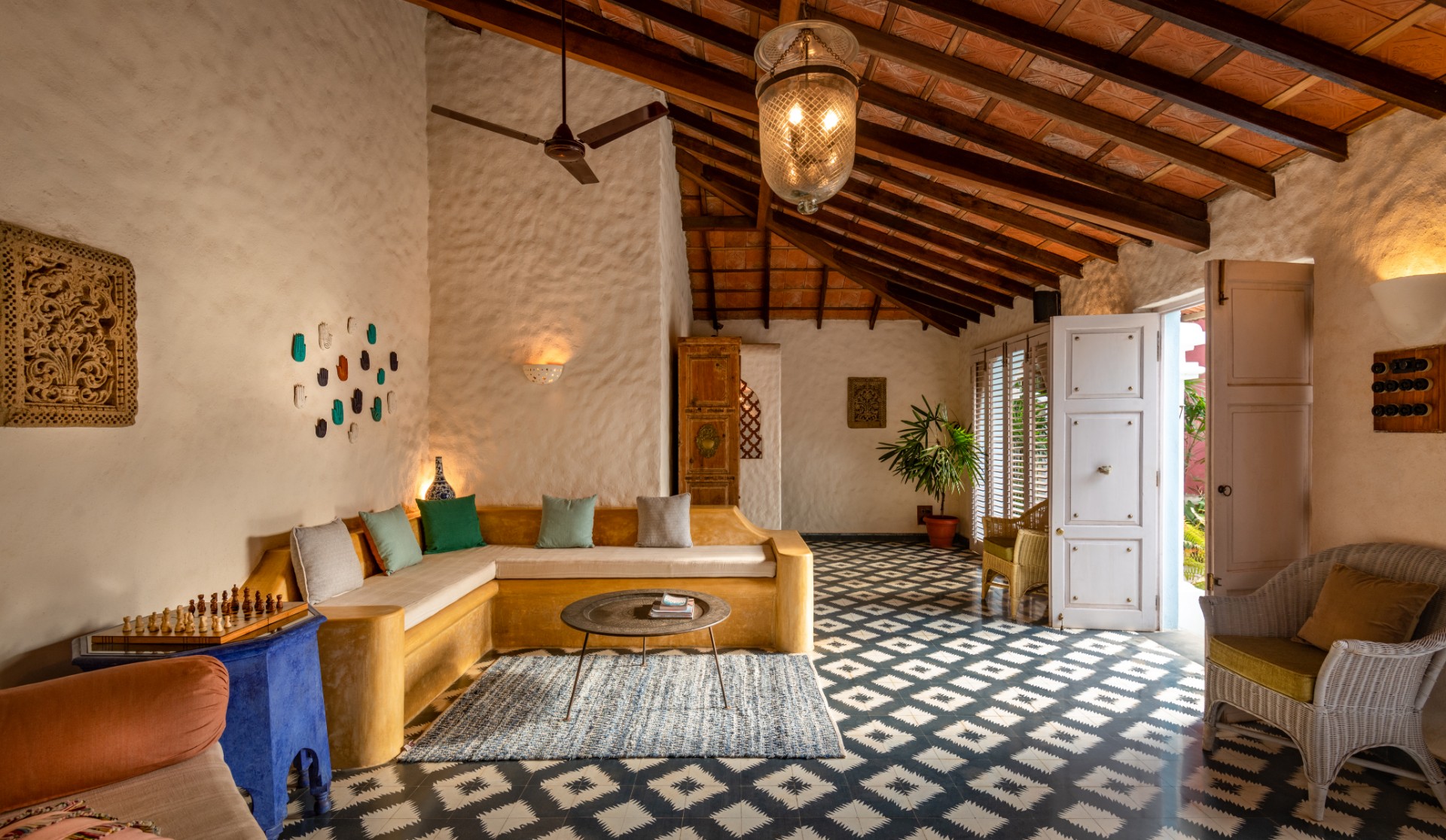 “Our wall of antique Macau plates—they belong in a house built by a Portuguese explorer.”

What dessert can you recommend from Café Amrapali? 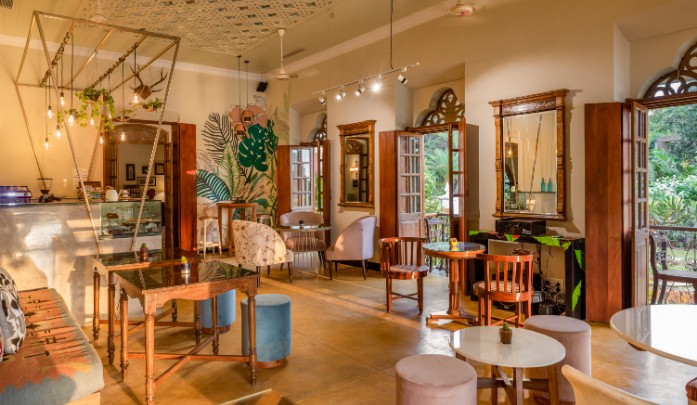 “Our French strawberry cake, Frasier. A ring of strawberries encased between two layers of French genoise and Crème Mousseline. We make the genoise by hand, something few pastry shops even in Europe will do. The 20-minute long whisking with a balloon whisk creates luxuriously long and soft strands in the genoise sponge and this makes for a luxurious and tender mouthfeel.”

What does a day off in Goa look like for you? 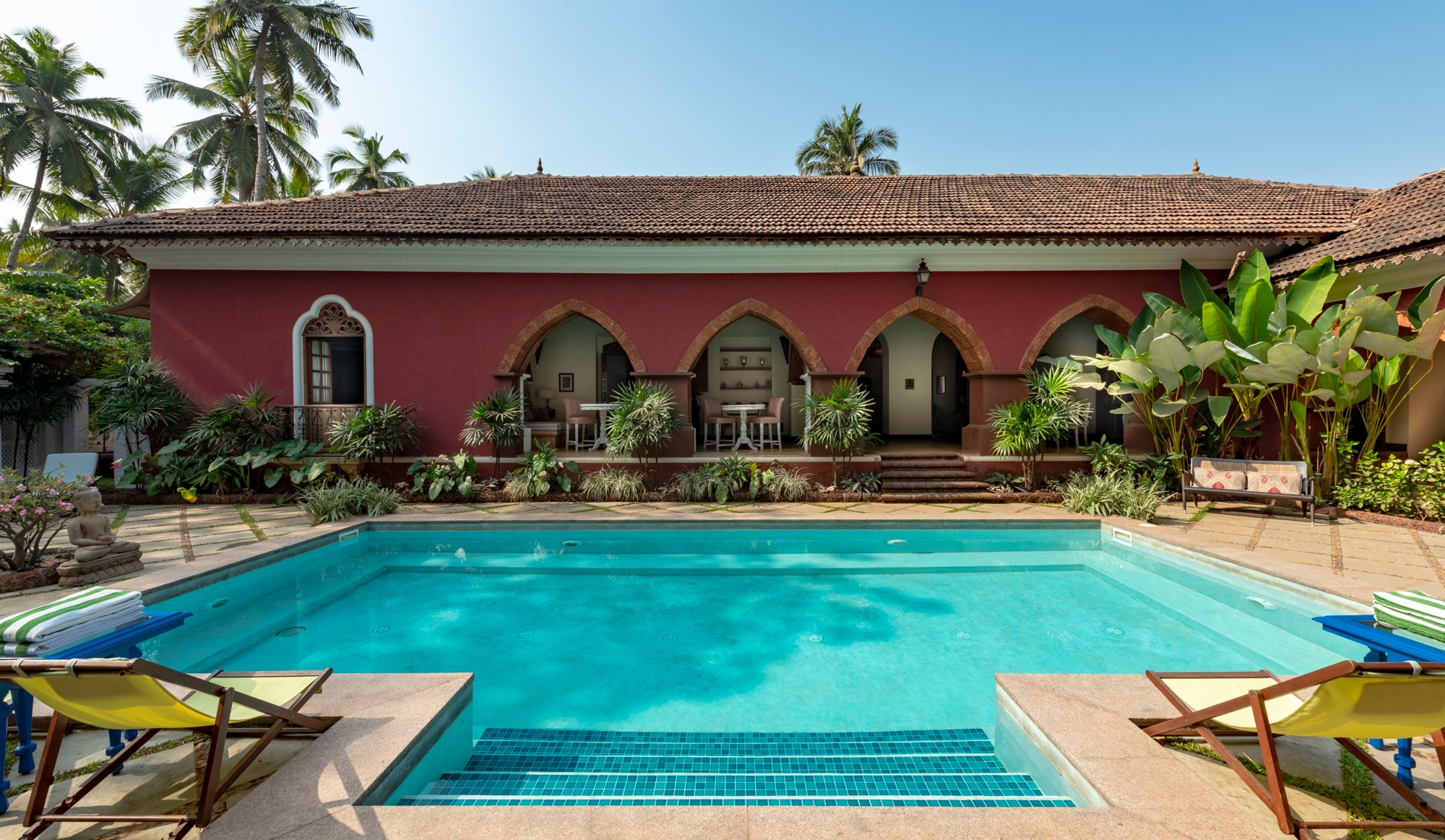 “I am constantly refining the experience of the house from the behind the scenes. Sometimes this means training the kitchen on a new dessert, at other times meeting local vendors and creatives to find a new coffee to add to the menu or an artist to host at Amrapali. A lot of my time gets spent on changing things in the house like the lounge overlooking the pool that we added last year, the riverside café and the new bedroom we added this year. The project needs various kinds of attention and so no two days ever look the same.”

What lesser-known site would you recommend for visitors? 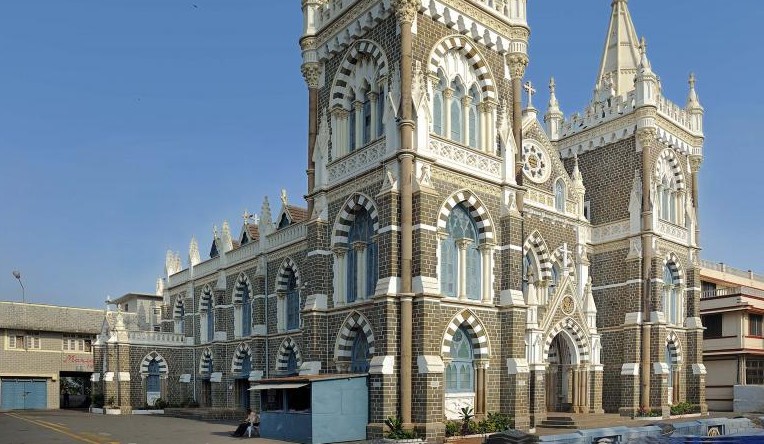 “The Mount Mary Chapel in Old Goa. Built in Baroque style, it is perched high up on the hill in Goa Velha and the views from there are spectacular.”

Introducing the Traditional Dishes of Goa: An Interview with the Taj Fort Aguada’s Executive Chef

A pleasing festa of coastal and tropical ingredients uniquely seasoned with both Hindu and Catholic influences, Goan dishes hold a vestige of the area’s 450 years as…