Once a stately home to the aristocratic Zamindars of Bengal, The Rajbari Bawali is no stranger to lavish décor, opulent banquets and legions of exacting staff. However, by the time businessman Ajay Rawla discovered it in 2006, the palatial home was in ruins—neglected since independence in 1947, crumbling and overgrown with vines. Rawla has since lovingly restored it to its former glory. The result? An award-winning majestic heritage hotel on a leafy edge of Kolkata that proudly evinces its noble history with a truly indulgent approach to hospitality. We speak to Rawla about how he managed such a skillful renovation. 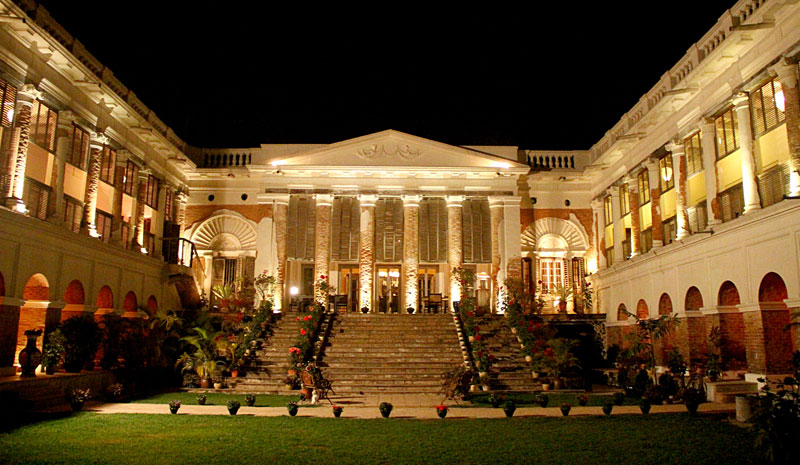 How did you take the leap from businessman to hotelier?

‘Whilst I was looking for land to set up a factory I was told about the magnificent ruins of the temple at Bawali. Intrigued, I drove to see these temples, which display similarities to those at Angkor Wat. To its side stood a weary and forlorn dilapidated building with a small door that seemed to be calling out to me.
It took me two years to acquire the property from its multiple owners, but since laying eyes on this fabulous stately home, I was overcome with a desire to protect it from falling into bits. The restoration journey began in 2008, with a team of master craftsmen and masons that were sent to the Aga Khan Foundation for training in the age-old art of lime-washing, brick moulding and plastering. From then onward, I knew I had to share this hidden gem with the world, and was delighted at the thought of being able to open the doors of The Rajbari Bawali to the public and welcoming guests into it as if it were my home.’ 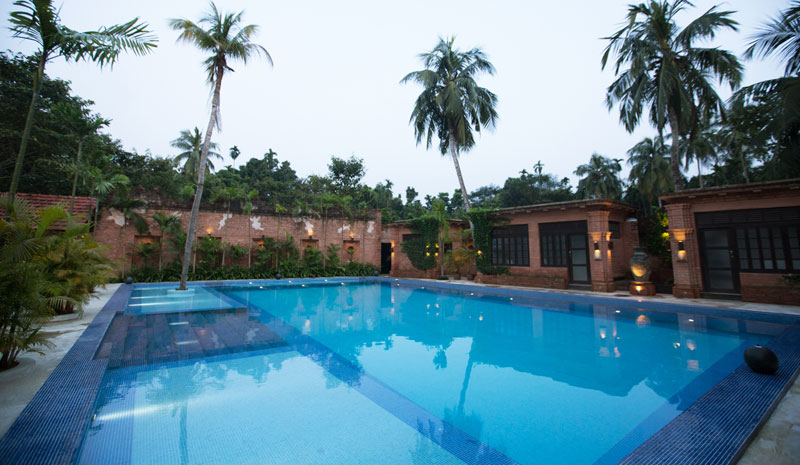 In your restoration, how have you managed to maintain the property’s heritage feel?

‘Considering that the ruins in which I found the property were what drew me to it in the first place, I decided to highlight the evidence of its rich history. Unplastered columns, broken capitals, walls rendered with brick mortar were left as we found them, or with minimal treatment. We did need to make a roof for the structure and in some cases, rebuild from the foundation up.
Almost all of our material was recycled, including salvaged Burmese teak and Italian marble reused from other colonial homes. Additionally, a brick mason was commissioned to custom-make bricks the same size as the original bricks to preserve the look and feel of the property.’ 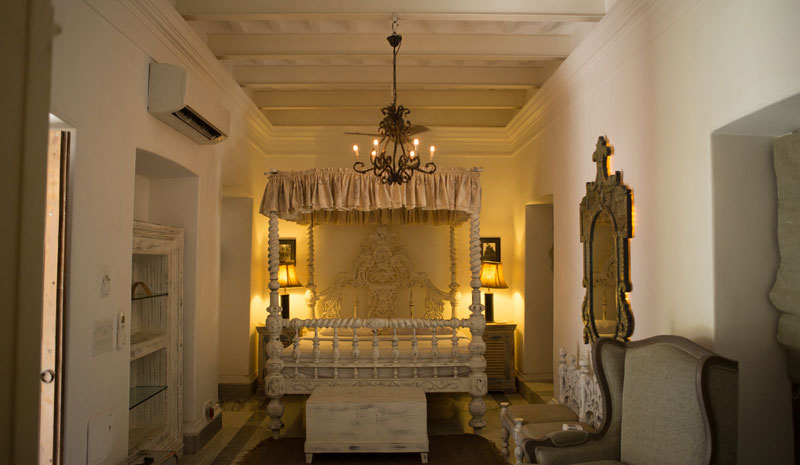 What restorative detail are you particularly proud of?

‘I love the feeling of the unplastered columns and the way the sun bursts onto the exposed brick.’

Which is your favorite room in the restored mansion?

‘I enjoy every nook and cranny of The Rajbari Bawali, but most of all I love our private dining room, which actually had no floor or roof when I bought it.’ 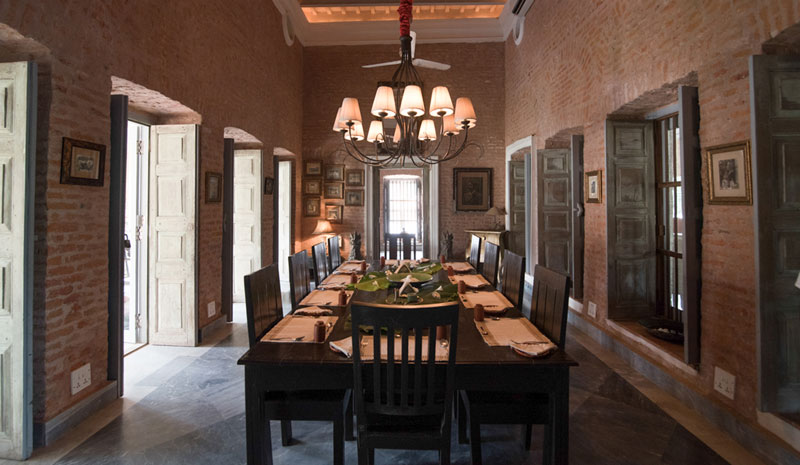 How has the property’s history influenced the service and guest experience at The Rajbari Bawali?

‘One of our missions is to provide an unforgettable experience reminiscent of the royal Zamindaris and colonial Calcutta.’

Of all the antiques and artefacts housed within The Rajbari Bawali, which inspires you the most?

‘I love the Blüthner piano, which once belonged to the chairman of HSBC, and it was sold to me by the then owner on the condition that she could play it whenever she visited Calcutta.’

What activity would you recommend guests engage in while staying here?

‘Travel is all about experiences and The Rajbari Bawali has a myriad of experiences, ranging from the calm and tranquillity that surrounds the property to the amazing spa with healing therapists from Bhutan. The morning village walk, which takes you to Naach House—formerly used as a dancing platform and located in the middle of a pond—allows guests to immerse themselves in the beauty and simplicity of rural Bengal while interacting with the local community. Equally unforgettable are the evening prayers (Sandhya Aarti) held on the regal stepsand spectacular opera performances. Last but not least is the sundowner experience on a country boat, where you can tailor-make a package that includes musicians and dancers and also get a personal sighting of Gangetic dolphins.’ 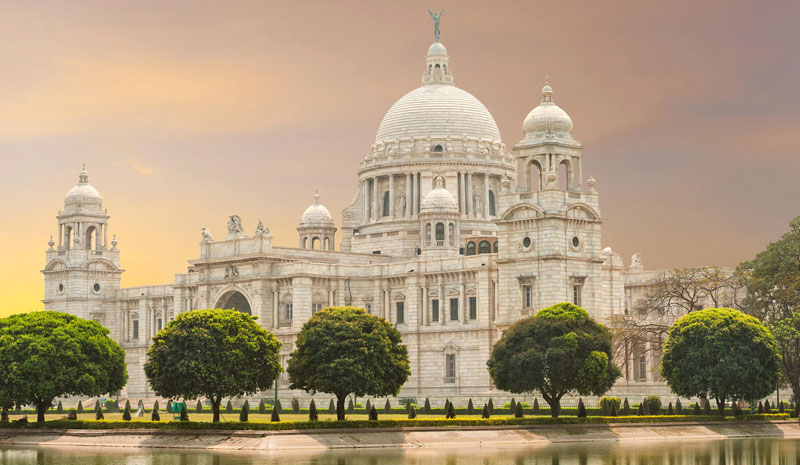 What site in Kolkata can you recommend your guests to visit?

‘I always enjoy visiting the Marble Palace, one of the best-preserved and most elegant houses of 19th century Calcutta. The mansion is famous for its sparkling white marble walls and floors, and has an exquisite collection of Western sculpture and Victorian furniture.’

Finally, which dish from The Rajbari Bawali’s kitchen would you particularly recommend?

‘My recommendation is the Bhetki Paturi, which is succulent barramundi marinated with Bengali mustard and steamed in a banana leaf.’

A Beginner’s Guide to Kolkata: 10 of the Best Places to Visit

Kolkata was affectionately dubbed “City of Joy” by author Dominique Lapierre in his bitter-sweet 1985 novel about one of the metropolis’ most notorious slums. Apply…

For Sujoy Ghosh, one of the top directors working in India today, there is no subject more inspiring than the city of Kolkata. In his…