Stunning Ladakh is a remote and beautiful Himalayan territory. Greaves Marketing Director Tanya Dalton recently undertook her first Ladakh trek to discover the wild region. Below, learn all about her memorable experiences – and admire her stunning photos. 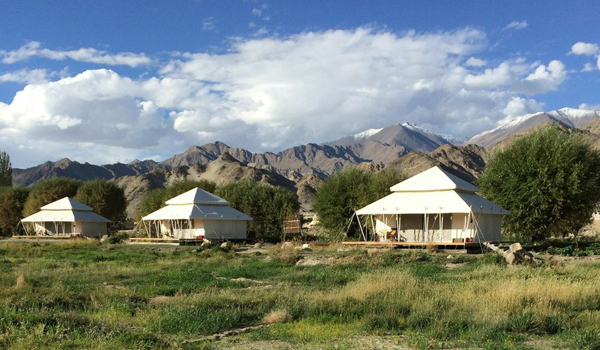 I recently set off to discover the mythical land of Ladakh, knowing little except that I was entering one of the most remote reaches of India. My interest had been piqued with the opening of the new Ultimate Travelling Camp based at the foot of the imposing Thikse Monastery. Now, I was here to discover it all in person. 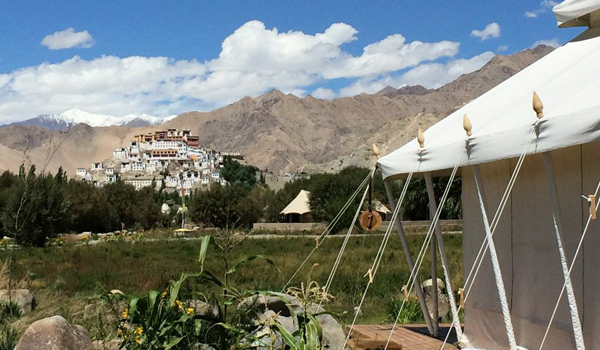 The Ultimate Travelling Camp combines luxury with a gorgeous setting

After our group arrived at Leh, everyone waited with bated breath, quite literally, to see how the extraordinary altitudes would affect them. Amidst the dramatic landscape of lofty peaks, willowy poplar trees, and ancient monasteries, we were all taken by the clarity of sightlines. The scenery is epic in the truest sense: sharp, snow capped peaks tower over rolling valleys, which are sliced with glacial blue steams and jigsawed with barley fields. Against this backdrop, the camp itself comprised of an idyllic garden setting of meadows, goldfish ponds and imposing, regal whitewashed tents.

Once settled at the luxurious camp, I did admit defeat and succumbed to a fairy-tale slumber that occupied my first day away. However, with the wooden floors, four-poster bed, and sumptuous surroundings of the tent, my sleep was likely inspired by more than just the soaring altitudes. Feeling fresher in the morning, we sampled the camp’s menu of both Western and Indian dishes, starting with baskets of freshly baked bread and morning pastries. 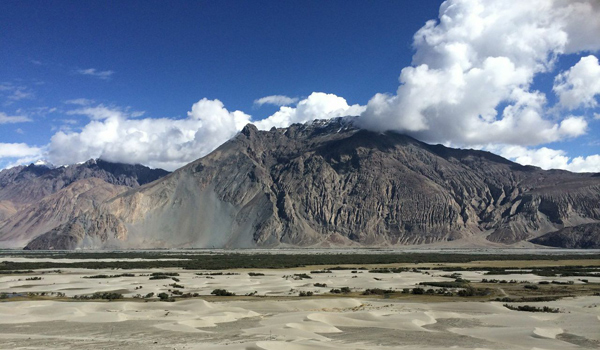 The region offers breathtaking vistas of mountains and valleys

By the second day we were ready to set forth and discover the timeless land on a Ladakh trek. We began with a trip to Hemis, Ladakh’s largest monastery, which hosts the famous masked festival every summer. Much like the Buddhist monasteries of Tibet and Bhutan, the well-preserved sanctuaries are very much thriving communities today. In the afternoon, we clambered to the nearby ruins of the Shey Palace and Monastery, which house a giant copper and gold Buddha and offer spectacular views of the valley below. 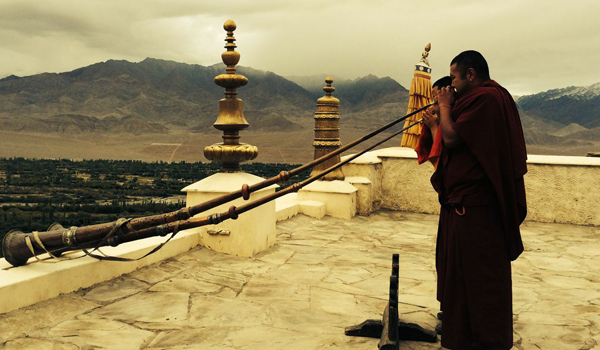 Monks at Thikse Monastery make the ancient call to prayer

The following day, we rose at dawn and headed for the neighbouring Thikse Monastery. In the early morning mist we perched peacefully on the rooftop of the world, silently witnessing two crimson-clad monks slowly and artfully announce the call to prayer with the reassuring boom of primeval Tibetan trumpets. Entering the temple, we slipped into the darkness and were absorbed into the peaceful and ancient practices of monks at morning tea and prayer.

Energised by our dramatic surroundings, we spent the afternoon on a rewarding Ladakh trek. A 20-minute drive from the camp brought us to Shey, where we began our trip along a picturesque brook, which led further into the craggy hillside. After a restorative picnic, we trekked high up into the mountains, lucky to have brilliant sunshine, for a couple of hours. Our all-knowing guide, Tashi, made sure we saw the sights – and also told us about challenging snow leopard treks that he leads in the winter months, which are best left to the hardcore hikers. 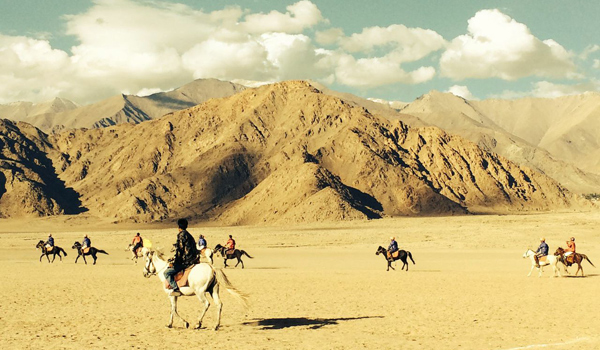 A local polo game with the backdrop of the mountains

To round out our third day, we arrived back at the camp, only to be whisked away to see a local polo game. Held on a vast stretch of desert-like landscape, the game was exciting to watch – we warmed up with cups of chai while cheering on the local team.

The following day, we left our luxurious camp behind and had a quick wander in the capital town of Leh, exploring the markets where we picked up local cashmere, antique postcards and almond oil. Souvenirs in hand, we embarked on a four-hour drive straight up into the heavens and through the imposing snowy peaks along the Khardungla Pass – among the highest stretches of motorable road in the world. 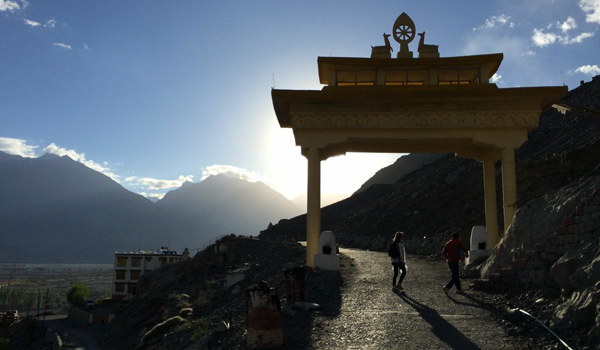 The region’s historic monasteries are veritable works of art

Arriving into the Nubra Valley, we were all struck by how different, and yet equally dramatic, the scenery was. From our base at the Hotel Sten-Del in the capital city of Diskit, a hearty half-hour walk uphill took us to the historic Diskit Monastery. Built in 1420, this impressive landmark today houses around 50 monks, and consists of several clusters of temples. Most striking is the main prayer hall, which houses an impressive statue of Maitreya Buddha along with a huge drum and many images of fierce guardian deities. 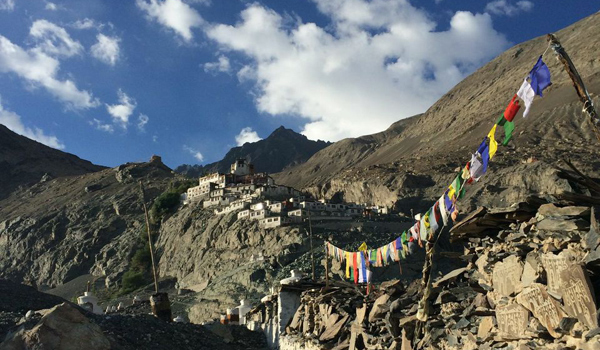 The Nubra Valley is full of beautiful scenery

Our next day in the Nubra Valley consisted of another blissful Ladakh trek up to the remote village of Hunder. Tashi again guided us expertly through the lunar landscape, where the brilliant blues of the river below and sky above sandwiched the mineral-veined mountainsides. Hypnotised by our surroundings, we hardly noticed the time slip away, and sure enough we had spend four hours along the spectacular mountain paths. 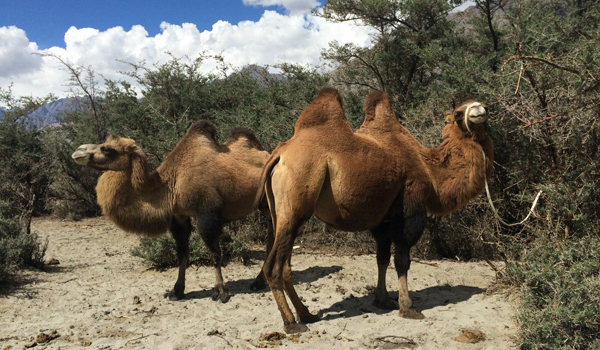 On our way back to the hotel, we took in a few more of the region’s iconic sights: in the heart of the valley, natural sand dunes were interspersed with poplar trees, while green pastures housed the local two-humped Bactrian camels – all framed by the mighty mountain peaks.

Our last day in the Nubra Valley took us to nearby Sumoor and its Samstanling Monastery, which saw us cross the vast valley on a mesmerising journey, snaking through mountains, valley and lakes. 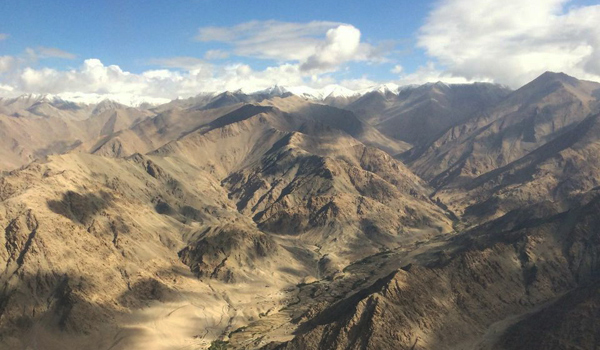 The Himalayan “roof of the world”

For our last evening, we bade a fitting farewell to the roof of the world. Returning to Leh through the beautiful Wari La pass, we spent a night at the Grand Dragon Hotel, where we took in mountain views from a picturesque terraced bar. After restoring ourselves with local delicacies at the Tibetan Kitchen, it was time to say goodbye – though our spectacular trip to the edge of the earth will long be remembered.