Indians celebrate everything, be it religion, culture, heritage, food, connections or traditions. If you want to experience the absolute best of India, experience its festivals. Time your visit during any of these religious or cultural feasts and enjoy the fine things that make Indian culture and lifestyle so unique. 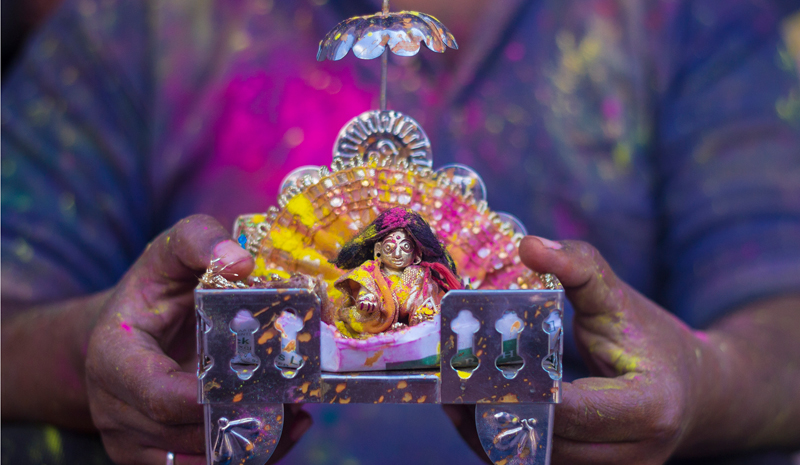 Janamashtami is a Hindu festival celebrated throughout North India to mark the birth of Lord Krishna. Famous for his mischiefs and notorious childhood, the festival is celebrated through various enactments of Lord Krishna’s life. Like in Mathura and Vrindavan in Uttar Pradesh, the birthplace of Krishna, the locals continue the tradition of Rass Lila or Krishan Lila as part of the celebrations. In Maharashtra, people celebrate through an iconic tradition of breaking an earthen pot filled with butter or milk dangling at a height from the ground. Mostly men come together to form human pyramids to reach the pot and claim its contents as another enactment from Krishna’s childhood where he with his friends would steal the butter, curd, or any other dairy product from his neighbors’ pots.

Every year on the night of his birth, people fast, chant prayers, and visit temples dedicated to the Lord. There are wonderful food traditions associated with the festivals. Though people fast during the celebrations, simple yet delicious Sattvic meals and sweets are cooked and served in almost all households.

Celebrate Holi with a twist at this two-day safari through the blue city of Jodhpur to the ancient temple village of Osian. Learn about various traditions followed for Holika Dahan and Holi from both the Royalty and the locals. Witness the burning of Holika in the ancient temple town of Osian with performances by traditional Rajasthan musicians, singers, and dancers. A fusion of culture with a tinge of luxury and novelty, the Jodhpur Jazz festival will take you through the most unique venues of Rajasthan like ancient stepwells, old havelis, ancestral homes, and a fortified desert camp. Polo, Jazz, cavalcade processions, private street party, and culinary delights prepared by Royal and Chieftains. 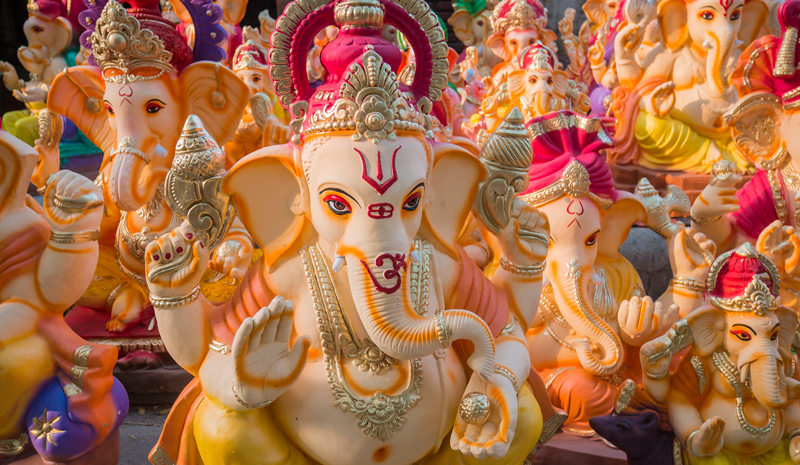 Lord Ganesh is deemed the God of new beginnings, wisdom and intelligence in Hindu culture. Hence, Ganesh Chaturthi is traditionally celebrated with much fervor and joy throughout India, especially in Maharashtra. Every once a year, people bring home the idols of Ganesh and worship them for 10 days by reciting Vedic hymns before immersing them in the water. Elaborate pandals (temporary stages) with majestic decors are set up allowing communities to host the stay of Lord Ganesh together.

On the tenth day, huge colorful processions with people carrying the idols of all sizes on their shoulders make their way through the Mumbai streets to the sea for immersion of the lord representing his going back to his celestial abode. People accompany the carts dancing and singing, urging the god to come again next year and bless them with prosperity and abundance.

The richness of Indian culture shows in its most graceful dance forms and to witness all the dance forms together at most mesmerizing open-air theater is once in a life time experience for sure. A 30 – day long annual festival held in the sleepy town of Mamallapuram offers a fusion of heritage and culture at the backdrop of the magnificent Shore temples. Classical dancers from all across the country sway to the tunes of music instruments and the balmy breeze of the sea. An eclectic mix of art and architecture, weave together an out of the world experience for the on-lookers. 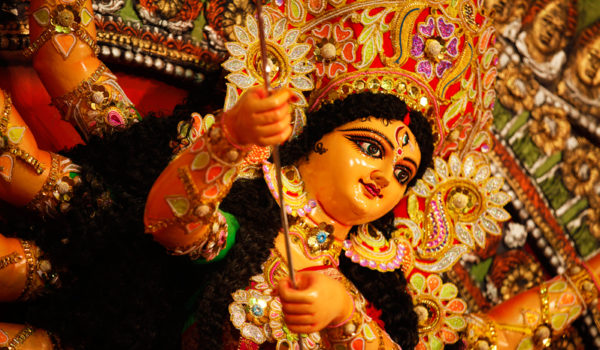 Durga Puja is a religious multiday festival, a celebration of the Goddess Durga and perhaps of life itself. A carnival of devotion, rituals, beliefs, and the spirit of womanhood, it is celebrated during the autumn season in Kolkata, Orissa, Assam, and the Eastern part of the Indian Bay. But for the longest, its origins and history are connected to Kolkata. The Bengalis have celebrated the festival with mammoth-like fervor and fanfare for centuries evolving it into a more elaborate, social, and creative affair. The festival has received the tag of UNESCO Representative List of Intangible Cultural Heritage, granting it elite status in the list of cultural traditions from across the world.

Mahalaya, the most significant day of the celebrations, is when the goddess Durga is set to leave her heavenly abode and descend to her home on earth and this marks the beginning. This is also the day when the potters in Kumartuli bring the clay statues to life by painting the third eye of the Goddess and by reciting the Vedic chants. The streets of the cities come alive with colorful markings at every possible corner and are dotted with bold marquis in every possible direction. On the tenth day, a spectacular play of color and devotion takes place, where married women decked up in their iconic white saris smear each other with red vermillion, sing and dance together. The Goddess is then taken away for visarjan or immersion in the Ganges so that she can return home.

Unravel the legends of the Himalayas’ mythical times at a 6-day celebration where the local Gods and Goddess of Kullu and the surrounding villages step out of their temples to bless humans. The real vision of all the regional deities leaving their temples on wooden chariots carried by the devotees to meet up once a year at the Kullu Dusshera will stun your senses. A celebration driven by belief and traditions where millions participate, Kullu Dusshera is a vibrant spectacle of culture and rustic living.

On the day of Dusshera, Lord Shri Raghunath Ji – the presiding divine king of Kullu is carried in the hand-pulled wooden palanquins decked with garlands and draperies by the messengers on foot from its temple at Raja Rupi Palace to Dhalpur Maidan. More than 200 other devtas (deities) also travel from their villages to the Dhalpur Maidan and are placed at their designated places for worship. Surrounded by the Pir Panjal and the Great Himalayan ranges, the Kullu valley brims up with the sound of music and chanting. Witness the locals dressed to their best in their local attires dancing to the tunes of local music in synchronized flow performing Nati – the local dance form. 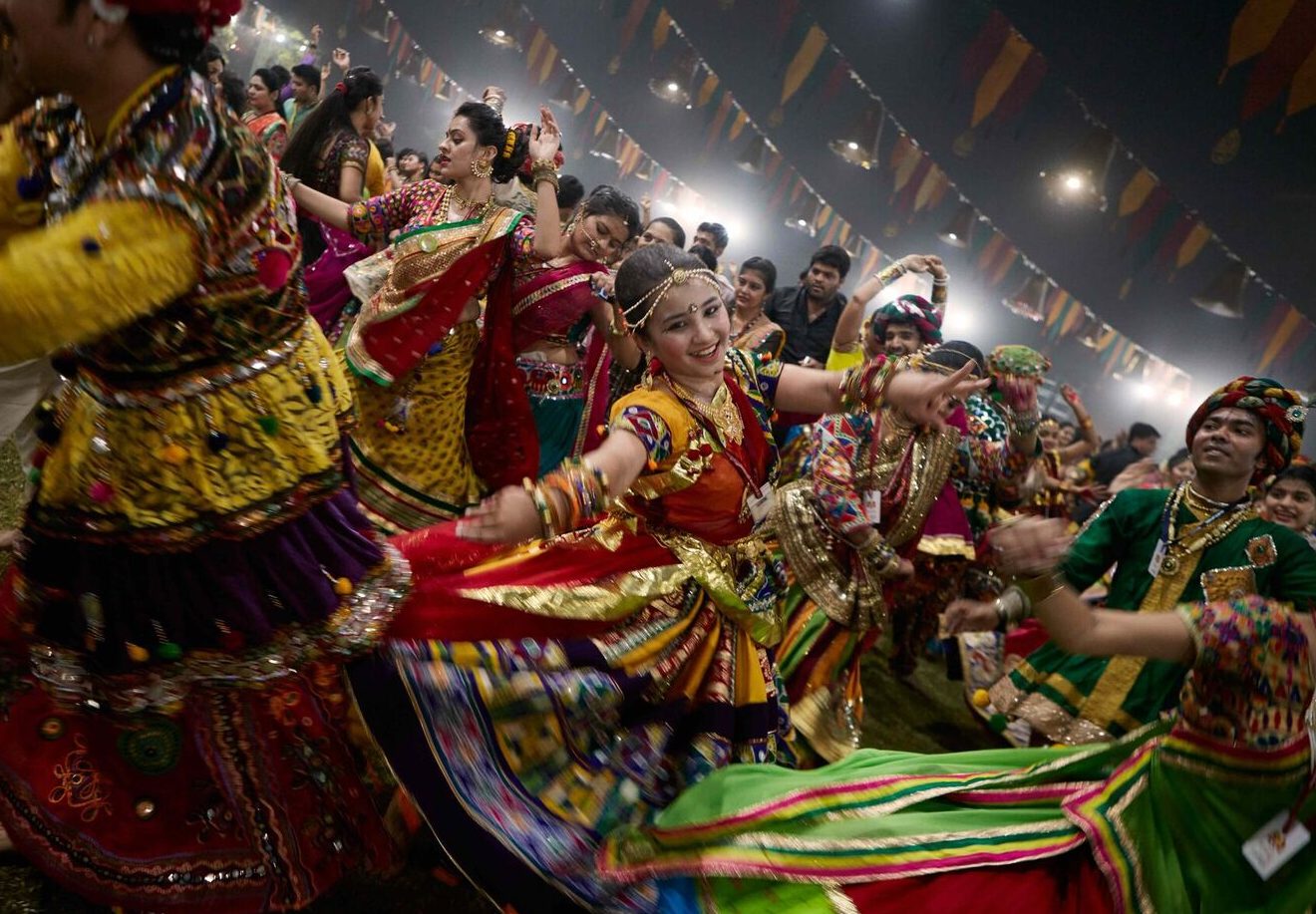 One of the most popular and widely celebrated Hindu festivals, Navratri has many different beliefs and rituals attached to it. There are four seasonal Navratri but Sharad Navratri which occurs in September and October is the most significant one. Navratri celebrates nine Goddesses over nine nights in many parts of India. The celebrations are prominent in Gujarat where streets and open grounds turn into huge music and dance arenas for everyone. People get together to perform the Garbha dance over nine nights and celebrate the colorful life of Lord Krishna.

In North India, the celebrations are marked by numerous Ramlila events, where episodes from the greatest epic Ramayana are enacted by local artists in makeshift theaters or temples in villages and cities. This wonderful tradition was inscribed by UNESCO as one of the “Intangible Cultural Heritage of Humanity”.

Millions of diyas (earthen lamps) brighten up the 87 ghats of Ganga in Varanasi on the night of Dev Deepavali every year on the full moon day (Purnima), in the month of Kartik as per Hindu Calendar. One of the most auspicious nights, the Diwali of the Gods, celebrated ten days after the Diwali festival, welcomes the descent of the divine on the earth. Devotees throng the ghats in huge numbers, singing and chanting prayers, they lit the diyas one by one, and offer them to the Ganges, making it the most spectacular of all celebrations on the planet. The people do not shy away from a dip in the chilled waters of the river in the hope to receive divine blessings.

It is a unique opportunity for photographers who can watch the grand aartis and ceremonies from the boats. The colors and vibrance of Indian culture can be captured on the ghats where locals perform the rituals. The synchronized display of cultural gaieties makes this festival one of the most phenomenal spiritual celebrations and an insight into the traditional Indian culture. 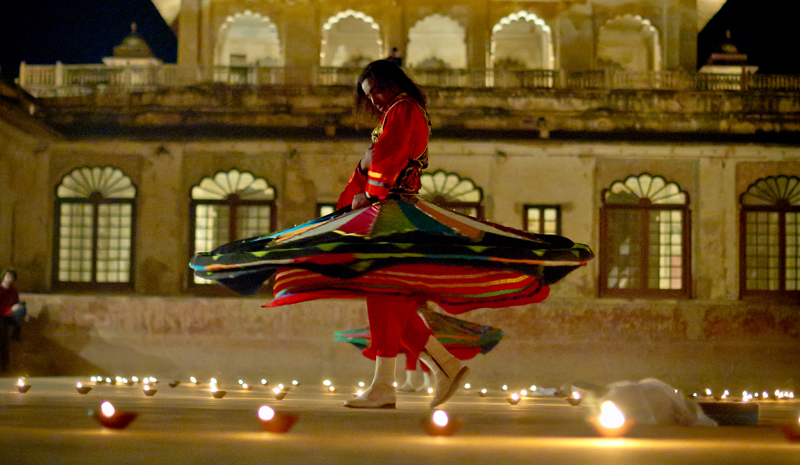 Jahan – e – Khusrau is a three-day annual World Sufi Music festival organized by renowned filmmaker-painter Muzaffar Ali. The festival commemorates the death anniversary of Amir Khusrau, an Indo-Persian Sufi singer, musician, poet, and scholar who lived under the Delhi Sultanate. Jahan – e – Khusrau presents rare lyrics of Sufi mystics in an innovative form and brings together the masters of the musical universe from across the globe under one roof. Musicians, Sufi singers, and dancers come together to weave their magic of music and dance, mesmerizing the crowds.

Kochi – Muziris is the celebration of the historic cosmopolitan legacy of the modern metropolis of Kochi and its mythical predecessor – the ancient port of Muziris. An initiative of the Kochi Biennale Foundation, the festival is the biggest contemporary art festival in Asia. It showcases the artwork across a variety of mediums including film, installation, painting, sculpture, new media, and performance art of Indian and International artists. The venues are mostly existing galleries, halls, public spaces, heritage buildings, and disused structures.

A zealous gala of brotherhood, fraternity, and tenacity, the grand celebration of Hola Mohalla bears momentous significance for Nihang Sikhs, an armed Sikh warrior order. The festivities take form at the Anandpur Sahib, a historic town in Punjab where campsites and langers (community kitchens) start popping up in every open space possible to host the countless visitors. The Gurdwaras are decked and made ready for the holy chanting and sermons. Here, the Nihang Sikhs reinstate their lifelong commitment to the Khalsa path, involving asceticism and austerity every year.

Hola Mohalla is a first-hand glimpse of the exuberant spirit of the people of Punjab and a euphoric spectacle in all its authentic flavors. Watch Nihang Sikhs in traditional blue robes and dastars (turbans) decorated with metal embellishments display skills like horsemanship, swordsmanship, archery, and more. Get mesmerized with the stunning twirl of Chakri – an instrument made of balls attached with string and move a leg at the enthralling beats of a Dhol. 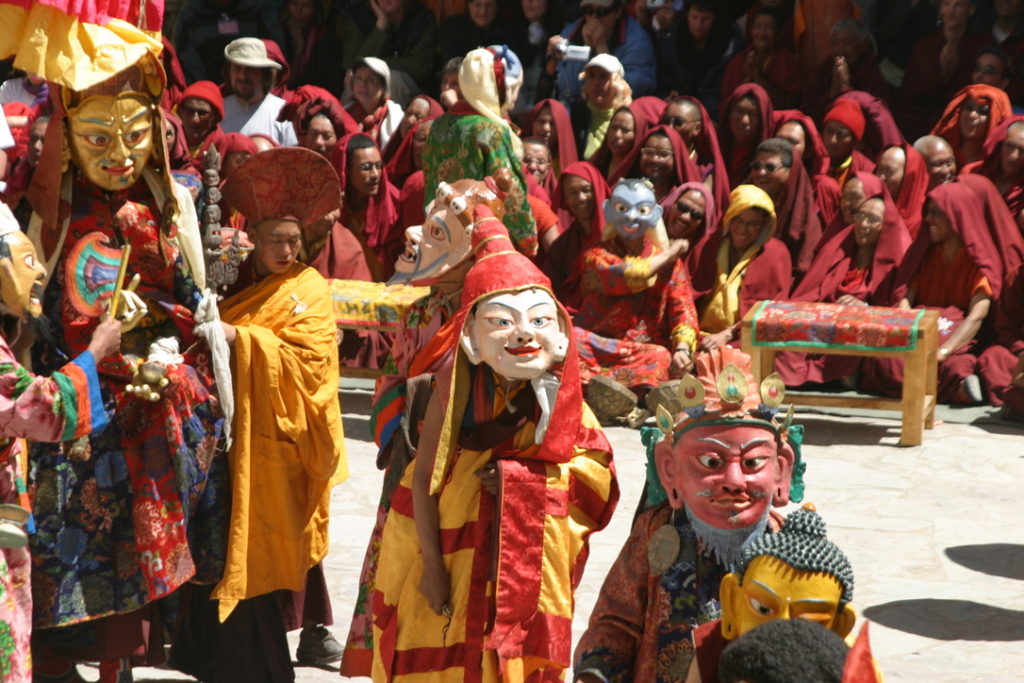 Catch the festivities of Guru Padamasambhava’s birthday celebrations and the triumph of good over evil at India’s biggest and wealthiest monastery, the Hemis monastery in Ladakh. Every year in July, the valley of Ladakh gets busy with preparations for the two-day merriment to commemorate the birth of a tantric Buddhist Vajra master who may have taught Vajrayana in Tibet. It is believed that Lord Padmasambhava defeated dark forces with his knowledge of Buddhism on this day, so the people come together to celebrate his greatness by singing prayers and dancing to the tunes of religious hymns. The locals don vibrant masks and dance to cleanse the negative energy. It is a wonderful opportunity to experience the culture, lifestyle, and food of Ladakh.