Named for the rich seams of architectural wealth it contains, India’s Golden Triangle—the tripod formed by Delhi, Jaipur and Agra—is understandably deeply etched by decades of passing visitors. Take a sidestep from the tourist trail, however, and you’ll discover a refreshingly tranquil sojourn that takes in the royal treasures of the Golden Triangle as they were intended—steeped in serenity and served with a decadent stirring of Mughal-inspired luxury. Photograph the Taj Mahal without the crush in the foreground, discover that Jaipur should be famous for far more than its pink city, and seek solace in Delhi’s leafiest corners. Here’s how to travel the Golden Triangle in true luxurious style. 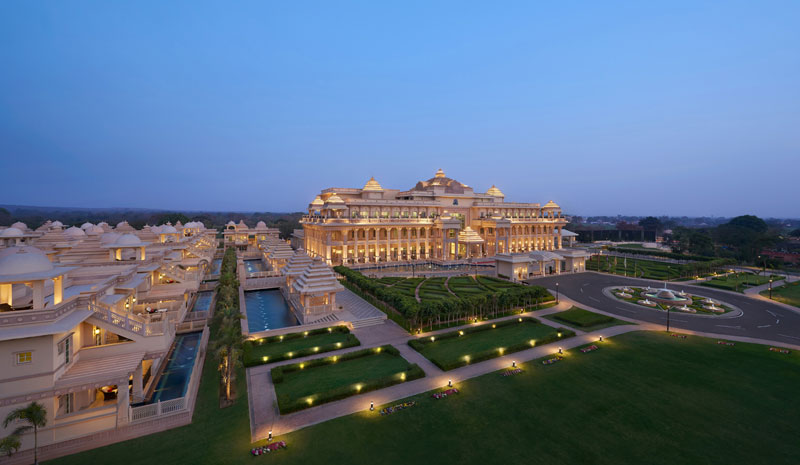 ITC Grand Bharat: The stately ITC Grand Bharat’s 27-hole golf course throws a shock of rich sandawana green across its 1.2sq km estate, setting it far apart from Delhi’s bristling hub 37km away. The resort is a rose-colored confluence of architectural details borrowed from across the Subcontinent, with 104 sumptuously appointed suites and a generous handful of dining options, including a rather lovely regional Mewati barbecue at the Apas Promenade. 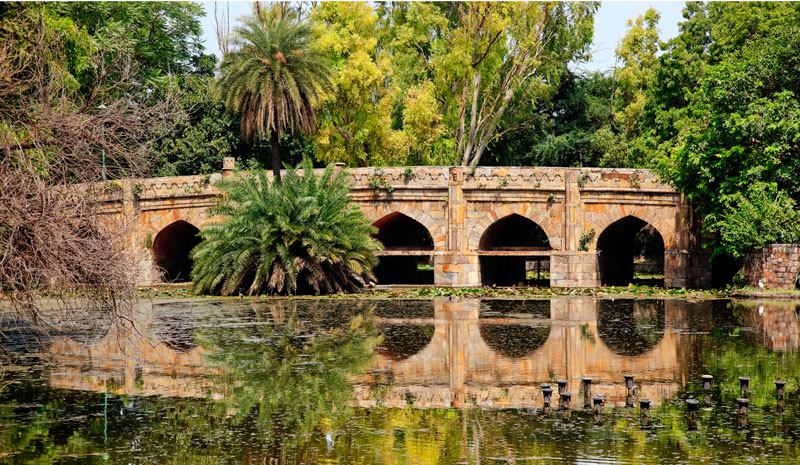 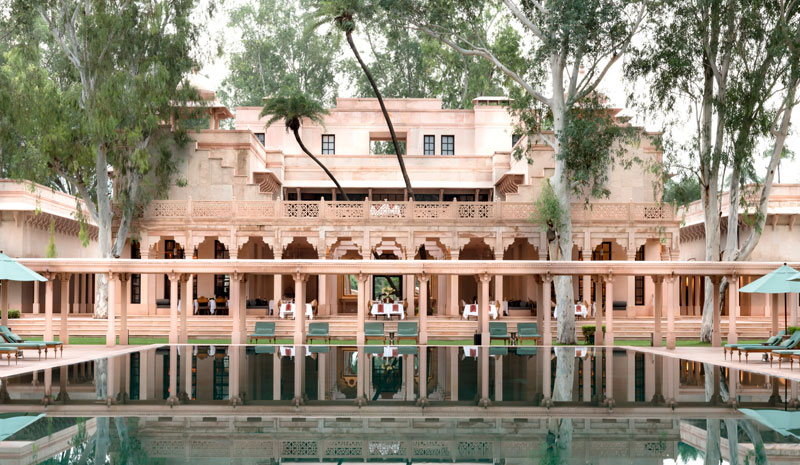 Amanbagh: Cast in Jaipur’s signature blush, Amanbagh neighbours a cluster of majestic 17th-century ruins, reached by a delightfully rolling camel ride across Rajasthan’s scrub-scattered landscape. The retreat’s suites hark back to the Mughal era, all domed cupolas and gracious arches with royal service to match, making this one of India’s most luxurious garden retreat hotels. Personalised four- to 21-day Ayurvedic wellness immersions are available for those in need of an extra, extra dose of TLC. 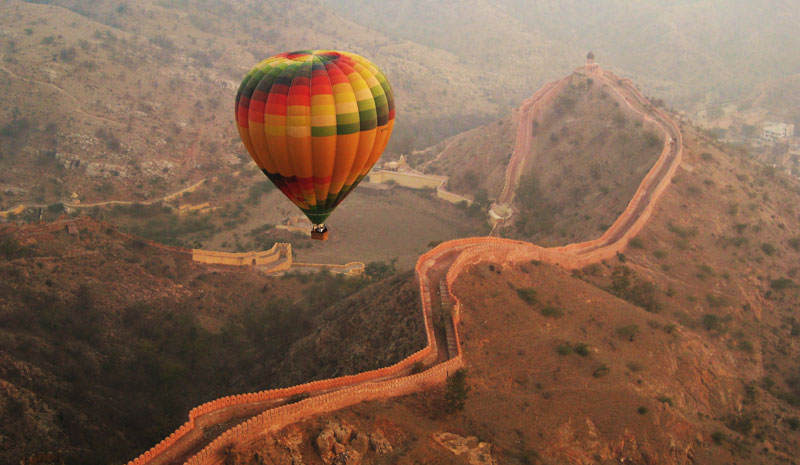 A hot air balloon safari: Leave the heat and hustle far behind as you soar above Jaipur’s yawning horizons, taking in its pink city and the Amber Fort as well as lesser frequented historic palaces and forts tucked in amongst the folds of the Aravalli Range—the hills which stretch across a large portion of the Golden Triangle. Sky Waltz offers an enchanting early-morning flight during which the sun’s rays slide across the rolling hills below, lighting up some of India’s most precious national treasures. 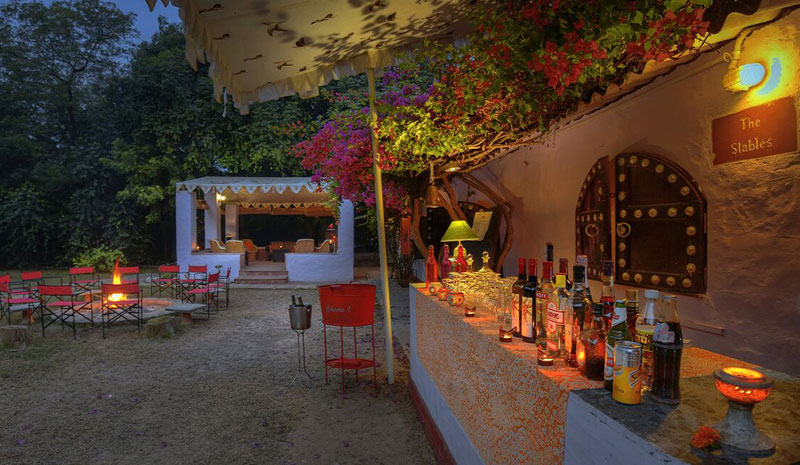 Mela Kothi – The Chambal Safari Lodge: Decompressing around a bonfire following a successful jeep safari (expect to spot blackbuck and sarus cranes, as well as Gangetic dolphins in the river), the chirps and chimes of Chambal Valley’s inhabitants settling in for the night, mingling with the clink of a gin and tonic being prepared, is something we could all get very used to. An hour from the Taj Mahal, Mela Kothi – The Chambal Safari Lodge is a charming, family-run historic treasure. It’s the little details that count here—the exacting service, the home-cooked buffet-style meals, the beautifully renovated cottages and, of course, sundowners by the fire. 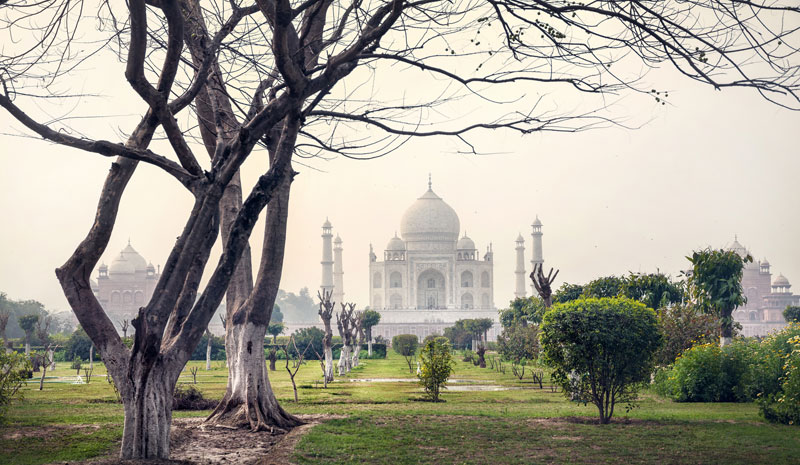 Mehtab Bagh gardens: As the crowds funnel towards the security gates of the Taj Mahal’s official entrance, sidestep into the stunning Mehtab Bagh gardens, reclining luxuriantly on the banks of the Yamuna river just opposite the Taj, for an unrivalled (and onlooker-free!) glimpse of the Golden Triangle’s most celebrated landmark. Designed as an extension to the Taj, its tended symmetric gardens and whitewashed pavilions certainly nod to its Mughal neighbour’s majesty, and a cool wander through the fruit trees here will certainly revive.